These past few weeks have been absolutely crazy, but there is ALWAYS time for dessert! Sometime between a family vacation, moving to a new apartment and getting engaged, I still managed to make time for a delicious and simple dessert. … END_OF_DOCUMENT_TOKEN_TO_BE_REPLACED

After 2.5 years, countless cute date nights and coffee-filled Sunday mornings,  I’m so happy to share some very exciting news with you! I’m engaged!!! I know for my friends and family and everyone on Facbeook, this news isn’t so new. … END_OF_DOCUMENT_TOKEN_TO_BE_REPLACED

You know those moments when you think that you have this really great, profound idea, and then you realize that someone (and often a lot of people) already thought of it? That’s how I felt making dinner the other day. … END_OF_DOCUMENT_TOKEN_TO_BE_REPLACED

Do you remember my really fun, really awesome friend? The one who has the best taste in music, planned our Jersey Boys night and Jimmy Buffett trip, introduced me to awesomeness that is the cafe at Watertower Place and served … END_OF_DOCUMENT_TOKEN_TO_BE_REPLACED

I knew there had to be a pun in that title somewhere, but I obviously couldn’t find it and that’s the best I could do.

I have a new goal. I am going to learn how to knit!

As you might recall from my Crafty Apples post and several posts after that, I already know how to crochet. I learned to crochet when I was in the middle of moving from Champaign to Chicago and was going to be spending a lot of time in the car and wanted a hobby. I had heard that knitting was harder than crocheting, which was why I opted for the single hook craft instead of the double needles. I ran a quick google search, watched one video and next thing I knew, I had a scarf. 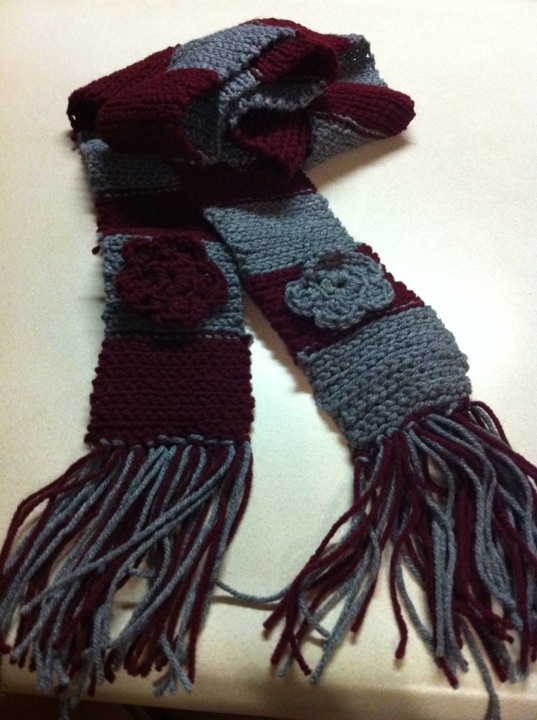 I still love to crochet, and I know I haven’t even come close to mastering it, but I’ve moved on to a new phase of yarn crafting: knitting.

My friend asked me if I could knit a blanket for her sister. I was pretty ambitious and thought, I could totally learn! I later found a similar pattern and realized that I would need knitting needles longer than I am tall to complete that project. I was probably more disappointed than she was. Then she asked if I could manage a chunky scarf. I knew I could manage to pull that off. So I went to Hobby Lobby, picked out some bright red yarn and grabbed a pair of knitting needles, picking the size randomly from an entire wall full of them.

I learned to crochet in the car, so I figured I could learn to knit on the train. So while I was on the train to Springfield, I typed “How to Knit” into YouTube and I was on my way. Or so I thought. I had to watch almost 10 different videos and read four website tutorials before I could figure out the basic knit stitch! I was so frustrated! However, I finally figured it out. By the time I got to Springfield, I had this: (!!!)

Once I actually figured out the stitch, it really was not that hard. So maybe I was watching the wrong videos. (Can anyone suggest any good knitting tutorials?) I learned to cast on, knit stitch and purl stitch. Casting on is how you get the yard on the needle to begin your work, knit stitch is the basic stitch and purl stitch is essentially a backwards knit stitch. I learned that knitting patterns are made by different repetitions and patterns of purl and knit stitches.

I figured I’d start small. I found a beginner knit scarf pattern to start with. I want to get the hang of this stuff before I commit to making something for someone else to wear in public. (Which let’s be honest, might not be for a while.) I’m going to make this scarf as my first knit project and see how it goes. This is how far I’ve gotten:

I know it’s not much, but I just wanted to share it with you. I haven’t been crafting enough lately, so I’m trying to get back in the swing of it. I wanted to be sure I keep blogging about crafts, even if I’m not quite finishing them. Maybe you can help keep me motivated! Does anyone else out there knit? Any suggestions? Websites to check out?